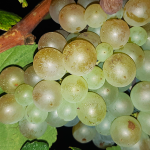 On Saturday 15th of September, it was the right time to harvest manually our red Garnacha. A grape variety of medium-early maturation that stands out for its great capacity of resistance to extreme temperatures and adaptation to poor soils.

A very versatile variety that confers good body and primary aromas such as wild fruits, roasted nuts and black cherries, features that will be the protagonists of our future wines and cavas.

This year, Penedès verified a more Atlantic climatology than a Mediterranean one, with the consequent problems related to this situation. Mildew, the disease most feared by vine growers who work in the vineyards near the sea, was the most dangerous problem in the DO Penedès. As regards our Lacrima Baccus winery, we rejected part of the production to continue guaranteeing the same level of quality and high standards to our consumers, an indisputable priority of our company.

The rains of February and, especially of March, marked the microclimate of Penedès. The spring temperatures were lower than usual and this became an advantage, slowing down the spread of the disease. The mildew moved silently without showing its typical signs and, as soon as it had occasion, attacked with severity.

Acting quickly, our team was able to extinguish the plague by carrying out a proper planning of the phytosanitary treatments and intense work of vegetation management.

The time of the harvest of the Garnacha have been decided based on phenolic maturation, so we opted for these dates and for a cool and endless night for our team of technicians, who works frantically. This image of industriousness will remain engraved on our heads; it seemed that there was a multitude of ants striving uninterruptedly in groups so that everything went as well as possible. The work of a year played an important role in this moment and only as a team and with an adequate planning of the tasks, we can achieve the optimal results expected.

Next weekend, around 22nd of September, it is planned to begin the collection of the Parellada, of later maturation. A variety whose cluster is very large, with very marked shoulders, homogeneous berries and whose primary aromas are fruity notes of white fruit, highlighting the citrus and floral touches. As usual, the collection will be done manually and at night, in this way, thanks to the low temperatures, the fermentation does not start without our control.

You can find out more about which cookies we are using or switch them off in settings.

This website uses cookies so that we can provide you with the best user experience possible. Cookie information is stored in your browser and performs functions such as recognising you when you return to our website and helping our team to understand which sections of the website you find most interesting and useful.

You can adjust all of your cookie settings by navigating the tabs on the left hand side.

Strictly Necessary Cookie should be enabled at all times so that we can save your preferences for cookie settings.

If you disable this cookie, we will not be able to save your preferences. This means that every time you visit this website you will need to enable or disable cookies again.

This website uses Google Analytics to collect anonymous information such as the number of visitors to the site, and the most popular pages.

Please enable Strictly Necessary Cookies first so that we can save your preferences!